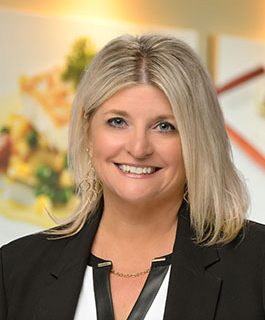 Melissa Johnson got her first taste of the hospitality industry at age 16 while working for the MCL Cafeteria in Upper Arlington. From the moment she took care of her first guest, she was hooked.

After high school, Melissa attended The Ohio State University and put herself through college working at the Refectory Restaurant as a bartender. Upon graduating with a Bachelor’s degree in psychology, she joined Cameron Mitchell Restaurants (CMR) as a dining room manager at Martini Italian Bistro (now Martini Modern Italian) and later became the first female general manager in the company’s history.

Making general manager was the realization of a career dream. Little did Melissa know that her adventure was only beginning. In 2001, Cameron Mitchell tapped Melissa to start Cameron Mitchell Catering sharing, “There’s no name. No budget. No plan. It’s yours to figure out and grow.”

In the early days, it was rented vans and trucks that moved the food and set-ups. One event at a time, processes got refined and the team learned new things about guest expectations, problem-solving and creative event management.

Today, Melissa serves as the Managing Director for Cameron Mitchell Premier Events, which is ranked No. 1 on Columbus CEO’s Leaderboard for the top Central Ohio Catering Companies. She has grown the business from zero to more than $16 million in annual sales, and oversees a team of more than 250 associates. When asked what she loves most about her job, Melissa touts her amazing team. “No matter the challenge, we are able to work together in order to successfully create lifelong memories for our guests. We work hard and play hard together!”

In addition to overseeing Cameron Mitchell Premier Events, Melissa is a part-time lecturer at The Ohio State University for the special events class, and serves as a member of the university’s Hospitality Management Advisory Board. She also serves on the Greater Columbus Sports Commission Board. Melissa also has received many honors throughout her career, including eight ILEA Ohio WOW Awards, an Esprit Award for Team Effort, and a PACE Award for Best Team Effort.

Melissa resides in Columbus with her husband and two amazing boys.